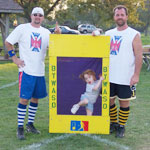 Every year in early May and early september there are wiffleball tournaments in Sycamore, Illinois. Buttermaker informed me about these tournaments through a funny message on 43people.com

I have not met Matt yet but I can tell he is a wiffleballer. I don‚Äôt think he will come close to hitting any of my pitches.

He has never seen “THE DEATH STAR” pitch.

He won‚Äôt have any idea what to do with “THE MATRIX” pitch.

“THE FIZZY LIFTER” will baffle him.

When I thorw him “THE STRING THEORY”, what will he possibly do with it?

And last but not least, what will he even think of doing with “THE TIGHTY WHITEY”?

I hope he gets a couple of teams together and comes out to our wiffleball tournaments, west of the Chicago area.

Does anyone think they can hit the Death Star, Matrix, Fizzy Lifter, String Theory, or Tighty Whitey pitches? I’m thinking that I can be like Luke Skywalker and destroy the Death Star. I can be like Neo and dodge all the Matrix attempts. But the other three will just baffle me.

It sounds like a fun tournament, anyone want to participate in them next year? I’m game. Let’s destroy some Death Stars!

okay, my first thought was this could be fun!! but alas, i check the rules and see that they don’t run bases. eeks – that would be my strong suit. sorry matt – if you get an invitation to a floor hockey tournie, sign me up.