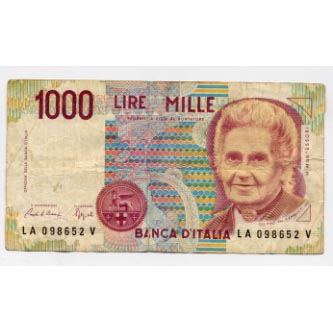 In December I bought a used vertical file cabinet at a thrift store for ten dollars. What a find! It was literally an answer to a prayer (the filing cabinets we looked at other places were $75 and up).

The bottom of the drawers were lined with Chicago Tribune newspapers from 1997 (rather fitting seeing that it was from the Tribune that I got laid off). It was interesting reading the sports section when the Cubs were the 2nd to worst team in baseball.

Then in the last drawer in the bottom, I pulled out the newspaper and found a scrap of paper in the very back. I thought maybe it was a cut-out from the paper. What could it be?

As I took the paper out and unfolded it, it was a… ONE THOUSAND LIRA BILL. Wow! Was someone planting a little secret for this thrift store filing cabinet?

My internet was down at home, so I called several friends to see how much this is worth. But nobody was picking up. I looked over the bill and it had an image of M. Montesorri on it. Rather fitting because my mother was a montessori school teacher and my brother, sister, and I attended a montessori preschool.

My girlfriend called me back and she looked up how much this 1,000 Lire bill was worth. Could this be a nice surprise? Well, it was. But not the kind of surprise I was expecting.

Which actually was a nice surprise–a surprise lesson about the value of money. Even though we may value money highly, it really ends up being worth not that much. There’s other things in life that are more valuable than currency which eventually loses all its worth.

Whoever loves money never has money enough;
whoever loves wealth is never satisfied with his income.
This too is meaningless.
Ecclesiastes 5:10

Here’s an interesting article about money and God. It talks about:

Hey, Matt. Had you already posted about being laid off from Tribune Co., and had I just missed it? In any case, so sorry to hear about that. You’re a talented guy, and I’m sure somebody else will pick you up, if they haven’t already.

i found one only my friend gave it to me and told me it was worth 3 mill in u.s… im gonna kill him

:)) and I found this one lying in the balcony , soaked with watter , and I dried it !!! oh as though it worthed dryind ! but I never thought it would worth more than 10 dollars , knowing italy ,but for 3 mill , how did you ever taken in that story ,Andy?

hey!! my aunt gave it to me and said it was worth 7 mill. in us so wat ill get somethin more valueble from italy after all im from italy!

dang i thought i was going 2 b high baller i dont think so 47cents?