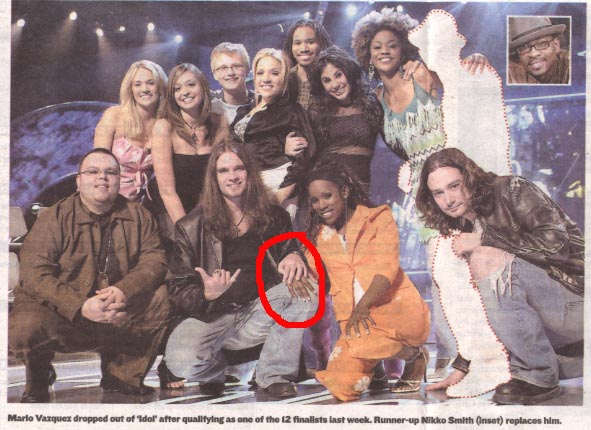 Upon seeing this photo of the 2005 American Idol contestants, I immediately thought that the dude with the long hair in front (Bo Bice) and the girl wearing orange (Vonzell Solomon) were a couple. It’s one thing when all the contestants are being friendly with each other. Putting an arm on someone’s shoulder or knee. That’s nice friendly fake stuff. “Look at us, we are so nice.” I can see her putting her hand all nice and friendly on his knee. But then Bo putting his hand on top of hers is like some sort of confirmation of affection for one another.

Yes, I am reading into this too much. But this was just my first thought. I haven’t watched the show at all, it was just my first impression of this photo. It’s funny how fake affection can be transformed into confirmed affection when two people show the same exact friendly affection—like holding hands.

Yes, you are reading too much into it, but that’s cool because this is a thoughts blog. I’m not saying the two in the pic couldn’t be a couple, but in a competition like this, contestants are out to win and if that means keeping other contests at arms length or playin’ them, then that’s what they’ll do. Did you know that Jen the “Bachelorette” used to work where I work now?!

I watched almost all of season 2 (the one with Ruben and Clay). and i watched most of season 3 (the one with fantasia). I didn’t watch a single episode of season 1. And i watched a few episodes of this season. I don’t like how they show the guys on one night and the girls on the next night and the elimination show on a third night. That’s too much TV. I don’t even know why I watch the show. It’s the only reality show that I watch. It’s at its best in the beginning of the season when they show all the crazies singing. It’s too much of a lounge show now. Simon is funny though. He’s always right on the money.

I could have written moose’s comment. I will say, however, that the men are better than the women this time around … which speaks to my conspiracy theory that a guy will win this season. Why? Season 1: female Season 2: male Season 3: female Season 4: to be determined, but will be a male

If I were to look at that photo right now, the whole one, I would have never noticed that. Sooner or later I will hopefully be able to see those little, but yet so big things in a picture. Kind of off the subject, but who did win that season? I forgot. 🙂

I hope to forget that the White Sox won the World Series in 2005.

As a body language expert and photo “reader” for law enforcement and the media may I share that touching hands can communicate affection, ownership or in a photo like this a desire to share the touched person’s power. I didn’t watch the show this season, but touching powerful people in a photo is a way of associating yourself with their power position. I see this in photos of people being photographed with celebrities or polititians. The regular Joe is the touch aggressor. Just a thought.

whish to goin information about the non verbal communication