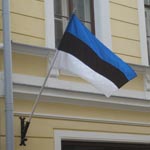 Estonian Independence day is a mere two weeks away. Let the celebrations begin!

On February 24, 1918, the Republic of Estonia was declared free from Lenin and his monster Russia. It was actually the Germans who convinced Lenin to let go of Estonia (along with Latvia, Lithuania, Poland, Finland, the Ukraine, and Georgia) in exchange for peace between Russia and Germany.

Then a few days later the German Imperial troops marched in and took over Estonia. Nice job, guys. sheesh! Funny thing is that I have both Estonian and German heritage!

Then eight months later, Germany was defeated in World War I thanks in part to America and now Estonia was finally able to breath peacefully. Uh wait, no. Cuz as soon as Germany left, Russia and Lenin tried to take over again. But the Estonian army repelled them. Take THAT, SUCKAS!

estonia is such a wonder place that every one wants to invade and claim it as their own.