ABC News posted a photo of all the Democratic presidential candidates, but they cut Dennis Kucinich out of the photo!

Before (with Dennis Kucinich) 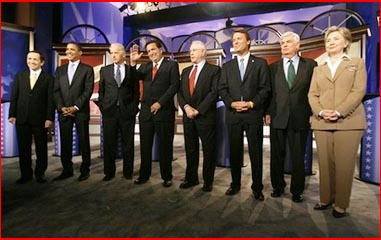 After (without Dennis Kucinich)

Oddly enough ABC News kept Kucinich in the caption, even though they cropped him out of the image. 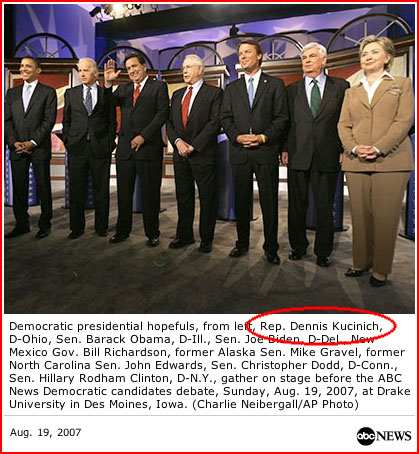 And to make matters worse, ABC News even messed around with the poll. Dennis Kucinich was winning the poll, so they took the poll down, and put the exact same question back up with the results reset! Read more at: Wembleyhead’s post.

On that same page, you can also tell ABC News what you think.

Thanks for posting this! I can use this in my classes this fall!!!

oooo! which class? Lemme guess… “Lies of the American Press”? oh wait oh wait! Maybe it’s “Stupidity of America and the press supporting only the people who they think will win, instead of who they truly like.” (kelly, this is no reflection on you, of course. I’m speaking solely in terms of the subject of this post).

Information Literacy – understanding the difference between reliable, accurate, scholarly sources and popular media. This is a perfect example of what I like to show the kids (college freshmen). So, basically it is for my “Lies of the mainstream media” class!! (and I figured you were talking about the post, and not me or my classes)

THANK YOU Matt, for taking action and posting this 🙂 I appreciate you spreading the word.

They also could have picked a photo that didn’t have wide-angle distortion. Clinton is horribly stretched. Question: If Barack Obama came out with a face like Jabba the Hutt, would the media run it? Me thinketh not.

“Clinton is horribly stretched”.. funny, she’s the only one that appears to be ‘distorted’ 😛 (i kid.. kinda) abc has modified that page, and they’re using a different image. this one with no cropping and no weight distortion.

There was actually a third poll preceding the debate titled “Who will win the democratic debate.” Mike Gravel was in the top three on that poll before it disappeared. Little did you know you are in the Matrix…