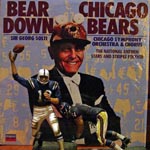 Next time you are walking to work, sing the “Bear Down” song. It really sings well with walking. The beat goes in sync excellently with a brisk marching walk.

When walking in downtown Chicago, I like to wear a scarf over my face and sing the song out loud quietly to myself and stomp my feet.

Bear down, Chicago Bears, make every play clear the way to victory;

Bear down, Chicago Bears, put up a fight with a might so fearlessly.

We’ll never forget the way you thrilled the nation with your T-formation.

Bear down, Chicago Bears, and let them know why you’re wearing the crown.

You’re the pride and joy of Illinois, Chicago Bears, bear down.

The Chicago Bears fight song, Bear Down, Chicago Bears, was introduced in 1941. Though Jerry Downs is listed as the composer, it actually is a pseudonym for Al Hoffman.

Not the worst piece of lyrics, though. I am crazy about music and try to keep up with the latest news:) T. there exists immense variety of good sites! song lyric search with lyrics and tabs is my last resort:)