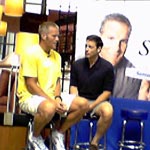 Just 10 minutes ago, Brett Favre was in Chicago’s Nordstrom Mall on Michigan Avenue being interviewed by Corey McFerren of Fox News. Behind Favre and McFerren was a large banner featuring Brett Favre promoting Sensodyne.

Apparently this is tied into some sort of Sensodyne challenge. From the Westfield Mall website:

Sensodyne Search for America’s Most Sensitive

Football star and legendary tough-guy Brett Favre reveals his sensitive side and encourages Chicagoans to do the same as Brett is participating in the Sensodyne Sensitivity Challenge and encouraging local Chicago couples to play the “he said, she said” style game.

The Sensodyne Search for America‚Äôs Most Sensitive hits Chicago June 27, 2006 from 10 a.m. ‚Äì 2 p.m. at Westfield North Bridge. The nationwide campaign is educating Americans about the causes and treatments of sensitive teeth and signing them up to take the 2 Week Taste Test. Fans can tell their own sensitive story to audition to be the next Sensitive Star and appear in an upcoming national Sensodyne advertising campaign.

Support a good cause – Sensodyne is putting its money where your mouth is. For each of the first 50,000 people who sign up for the Sensodyne 2 Week Taste Test, Sensodyne will donate $1 to the Brett Favre Fourward Foundation, a non-profit organization that supports programs for disadvantaged and disabled kids in Wisconsin and Mississippi.

Sensitivity Challenge? He said she said? Maybe Ozzie Guillen needs to participate in this as part of his sensitivity training Major League Baseball is forcing him to take.

The Sensodyne website says: “Sensodyne Search for America‚Äôs Most Sensitive crosses the country to find who is most in touch with their sensitive side.” America’s Most Sensitive? So does that mean Brett Favre is one of the most sensitive sports stars? It’s weird that he’s doing this in CHICAGO–his biggest rival city. Perhaps Green Bay isn’t quite the media center.

As I framing the picture above, a security guard came by and told me I was too close. So I took one step back and just extended my arm forward to snap this shot. There were only about 10 bystanders there–three of which were giddy high school girls in Packers jerseys. How did they know Favre was gonna be there at 9:10 in the morning? Surely they stalked him from his house and followed him down to Chicago.

I’ve always seen brett favre as a sensitive guy. He might just be the most legitemately sensitive man in sports. but the real question… Is he 2 Legit 2 Quit????

Oh i’m sure if they refilmed Too Legit to Quit, Favre would be in it. They would need a dopey white guy.

oh dear, i’m afraid for him. brett favre sooo….. sensitive????? does he really want everyone in chicago to know that?

Being there was like being in a warp zone. So many things did not add up. On top of that, nobody could hear Cory McFerren interview Favre, because all the echo noises that the mall produces from the random sounds. It was almost like, did that even happen?

Maybe Favre will announce his retirement at the Sensodyne Sensitivity thingy.

this is all very strange. this is an obvious marketing stunt by sensodyne, but they’re trying to pass it off as some sort of charitable event. Sensitive gums? doesn’t bret have better things to promote as a good cause? and who in chicago gives a rat’s behind about favre? and why is bret wearing a yellow shirt? packer gold? does he really want to display packer gold in the middle of chicago? or is the yellow symbolic of something? decay? decaying gums? that’s just gross. and why is corey mcferren wearing loafers without socks. that’s stinky. though i have to give bret props for such good posture in the photo. He looks alert and ready to go. I will have to keep this in mind for my fantasy draft this year.

and the play on the word “sensitive” in relation to one’s gums and one’s personality being sensitive is an awkward comparison. It’s forced.

Everything aobut the event was forced. Favre in Chicago? Football… sensitive… teeth? I have to hand it to Sensodyne, it sure took some creativity to add up these very different things. It’s too bad that the final result was just a mixed bag of weirdness. I like your yellow shirt comment. Ha! yeah. yellow shirt for yellow teeth. That was a good move, Sensodyne! haha! Loafers without socks is just a very odd fashion. Always has been. Always will be. It’s like they wanted to wear sandals, but their toes are too ugly to show in public. So, moose, are you going to pick up Favre in your fantasy league? Or are you just going to exhibit good posture to have an alert mind during the draft?