Underdog Estonian Raul Must started off his first round against Poland’s Przemysław Wacha. Raul is ranked 74th in the world badminton rankings with Przemysław currently at 15. Przemysław also won the bronze medal at the 2008 European Badminton Championships. 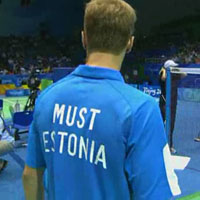 The backs of all the Olympic uniforms for badminton have the player’s last name, and then their country. That makes the back of Must’s uniform say “Must Estonia.” Very cool. 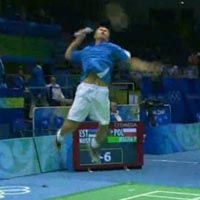 Raul Must ruled the beginning of the first game 7-4. 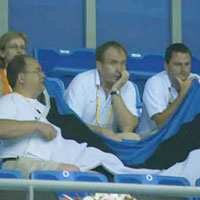 However, the Estonian player’s fans got worried after a half-game break with Raul down 10-11. He just fell apart going down 11-15. During the half-game break it looked like the Poland coach gave Przemysław some excellent tips enabling Przemysław to destroy Raul 14-21. 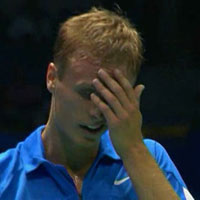 Raul just looked really tired, always wiping his face from the sweat. Przemysław won the first game with a finese underspin shot causing Raul to unsuccessfully dink the birdie into the net.

The Estonian got literally smashed in the second game of the match as it started off with 0-5 with Przemysław getting all five points from deadly overhead smashes that just befuddled the Estonian player. A Polish smash ended the game and match 15-21.

You can watch this match on NBC’s website. Go to this Raul Must