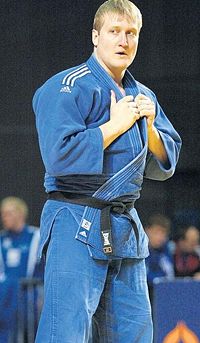 The question on everybody’s mind. Who will carry the flag for Estonia in the opening ceremonies of the 2008 Olympics?

It will be the great super heavyweight Judo champion, Martin Padar. At 6’4″ 300lbs, he rules the heaviest weight division (100kg) in Judo. Here’s the following world championships he has won:

Just check out that super cool blue robe-thing he wears. The man is a Judo wrecking ball. Watch him destroy the world online on Thursday, August 14 and Friday, August 15. The man will simply judo-ize the competition with his incredible Estonianess.

All next week spudart.org will feature blog posts about Estonia in the Beijing 2008 Olympics.

Our family had the good fortune to host Martin during the 1996 Olympic Games in Atlanta. He was a joy! We are so pleased that he was chosen as his country’s flag-bearer. We are cheering – loudly!

I think he should dump that plain cloth belt for the much more stylish braided belt. But, maybe that’s because I’m an old guy ; )

Carole, Wow! What an honor! I’m also impressed that you found my blog post. Anonymous, ha! That totally made me laugh out loud!

spud, did any videos appear on utube capturing the estonians marching in the opening ceremony?

It’s funny that you spell it utube. I have never seen anyone do that before. If there are any videos of the broadcast on youtube, you can guarantee those will be taken down pretty fast. Hopefully, there would be some homemade videos up of the Estonians. I couldn’t find them on NBC’s video online. NBC totally mixed up the order of the marching countries. Literally, they took the tape, and cut and pasted the countries around in different order for their commericials.