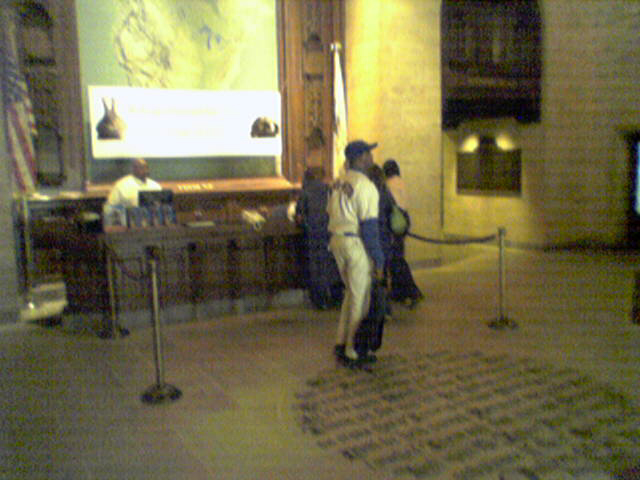 October 2008. A week after the Chicago Cubs disgraced themselves in the playoffs. Less than one month before the Obama election.

Ronny Woo-woo, the “ultimate” Cubs fan. For those who don’t know Ronnie Woo-woo. He’s this dude who dresses up in a full cubs uniform and attends every cubs game in the bleachers and YELLS, “GO WOO CUBS! WOO! GO CUBS! WOO!” And he does it non-stop throughout the game. Cubs fans have a love/hate relationship with him. It’s cool that he has such passion. But seriously, you can hear this man across the park in Wrigley.

First I snap an unsuspecting photo with my cell phone–pretending I’m talking while I photograph him. Then I go up to him and welcome him…

He literally said that. Although he didn’t yell it out.

I laugh and ask him if he comes down here often. He replied, “Nope, I haven’t been down here in 22 years.”

I’m shocked, “Really?! Well, welcome to Tribune Tower.” He thanks me and I walk out.

As I walk down Michigan Avenue, I’m delighted that I ran into him in the lobby. But then I realize that it would have been REALLY cool to give him a tour of the Tribune Tower. I love giving people tours of the building. Imagine hanging out with Ronny Woo-woo showing him around. That would be mad-whack-crazy! But then I rationalize that it would be kinda weird for me to walk around with him, because as I show him the newspaper floor, I don’t really know anybody down there, so it would be a little weird as people would be like, uh, who are you bringing Ronnie Woo Woo around? And he might want me to introduce him to some sports reporters or something. Then again, maybe he already knows the Cubs reports. Oh. And maybe some of the sports reporters might not want to be interrupted by him. But then maybe they would. *Shrugs* Who knows.

I debate this over and over in my head, and then I just rationalize that by this point he would have either left the building, or someone else would have shown him around by now.

An hour later I come back to the lobby ready to ask security what ended up happening to Ronnie. But lo and behold who is STILL standing in the lobby? Ronnie Woo Woo. He’s been there the whole time. I’m all excited and bouncy seeing him again. I go up to him and welcome him and said something stupid like, “Oh wow! You are still here!” The security guards behind the desk just kinda roll their eyes. So I know to just leave it at that. I wasn’t about to get in the middle of that.

Hahaha! Just hearing about who that guy is made me smile. And then he shows up where you work, in full uniform! Haha! Would anyone recognize him if he wore normal clothes? Does he have a regular job where he doesn’t ever say woo woo!? Good job saying hello to him. I would probably have just stuck to the sneaky cell phone photo 🙂

Ronnie Woo Woo loves attention. People go up to him all the time to shake his hand or take photos with him. So I knew he’d enjoy me going up to him–I think that’s the only way I could have approached him. Someone like Sam Zell (the new owner of tribune), I ran into him in the lobby the first day he bought the Tribune. Everyone ran over to shake his hand, but i was just satisfied to stand back. But he did wave at me, which was nice.

WOO HOO! And you call yourself an introvert. Chyeah, right!

I guess that other 12% was squashed when you saw Ronnie !

My ex-boss saw Ronnie Woo in The Gap around the same time. It might have even been the same day. Imagine walking into The Gap and seeing him. I’d be shocked.

That would be shocking. All he wears is the Cubs uniform. Why would he be in the Gap. Oh i know. Maybe buying clothes for someone else. Or maybe pjs. Surely he doesn’t wear the cubs uni to bed.

The only famous person I’ve seen in the Tribune Tower lobby is Barack Obama. He’d apparently been to visit the newspaper’s editorial board. About a half dozen tourists in the lobby recognized Obama and he agreed to pose for photos with them. One lady was disappointed when her camera’s flash wouldn’t fire. Obama then suggested that they simply walk over to a portion of the lobby bathed in sunlight. Obama seems like a genuinely nice guy — and he gets points for thinking on his feet.

Barack O’Bama , Ronnie Woo-Hoo, one in the same…just a disgrace to Chicago and the whole Nation. Thank you for giving Sweet Home Chicago a new name Chitcago. O’Bama you really duped us all.