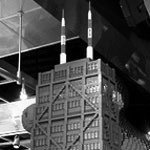 Walgreens no longer has a toy section in its downtown Chicago stores. With the redesign of Walgreens floor layout last summer, they completely eliminated their toy section. So now other than the Lego Store on Michigan Avenue, there is a complete absence of toys in downtown Chicago. How sad.

Tribune Tower had a toy store? On the 14th floor? Well, kinda. Back in January 2004 I made a blog post about toy store closings: “Toy vacancy in downtown Chicago” where I said that I was gonna open up a toy store at my desk. Haha. But then in December of 2005, I was part of a company-wide cost-cutting layoff. I returned back to Tribune in April 2006 (they just couldn’t keep me away!), but this time around I’m trying to keep my work desk less cluttered with stuff. But…

PLEASE! CAN SOMEONE OPEN A TOY STORE IN CHICAGO!? If someone knows of any toy stores in downtown Chicago, please let us know in the comments of this post.

I think there’s a game store in Water Tower Place. There’s also the Disney Store on Michigan Ave., as well as that funky little store at the top of the Chicago Place mall next to the foodcourt that sells lots of cool Japanese toys. I’m not sure there’s even a toy section in Macy’s. There used to be one when it was MF by the Santa entrance, but I’m not sure it’s still there.

Ah yes. There is a game store in Water Tower Place. It’s called Gamer’s Paradise. They sell a few toys, but they are primarily a game shop. But hey, it’s something! Water Tower also has the Discovery Store with some toys. Oh the disney store. Riiight. And yes! that weird little store at the top of Chicago Place. Isn’t that like a toy train and car store? I didn’t know they sold Japanese toys. Wow, so if we add up all these shops, we almost have a full-service toy store: Lego, games, japanese toys, disney toys, educational toys. But my main criteria for a toy store are three requirements: 1) Must have G.I.Joe action figures 2) Must have Transformers 3) Must have Hot Wheels. The store in downtown Chicago that comes even remotely close to one of these requirements is Gamers Paradise selling a 60-sticker book of Transformers for $6.99. Man, that was so much fun looking through that book with all the classic artwork of transformers.

I was having a related conversation with a friend a couple of weeks ago. The reason there are no toy stores in Chicago is because there are no children in Chicago, at least not in the city. All of the kids live in the suburbs or north of downtown.

Sorry, kids also live south of downtown, my point is that there are no kids downtown.

but but but but we have lots of kids that work downtown. Like you and me!

I was thinking that very same thing when I was responding! Too funny! Maybe we should open a toy store!

Galt Toys. I’ll have to check that out. Thanks Wendy!

I know of a Great toy store in Chicago! Monster Island Toys, 3407 S. Halsted St. Chicago IL 60608 773-247-5733 Open 7 days aweek Mon-Sat 11-6pm Sun 11-4pm http://www.monsterislandtoys.com They have over 500 Godzilla figures instock all year round! WOW! They also have many rare hard to find japanese sci-fi dvds. They also have high quality toys like Gundam,Anime,Manga,Bandai Japan,Hot Toys,McFarlane,Medicom Toys,Neca,Hello Kitty,DC & Marvel Legends figures,Alien vs Predator,Scarface, Chucky dolls this place is very unique an rare. Its located in the Bridgeport area not far from White Sox Park Us Cellular field. Check them out! We need to bring business to these small rare shops so they will be around for our kids.