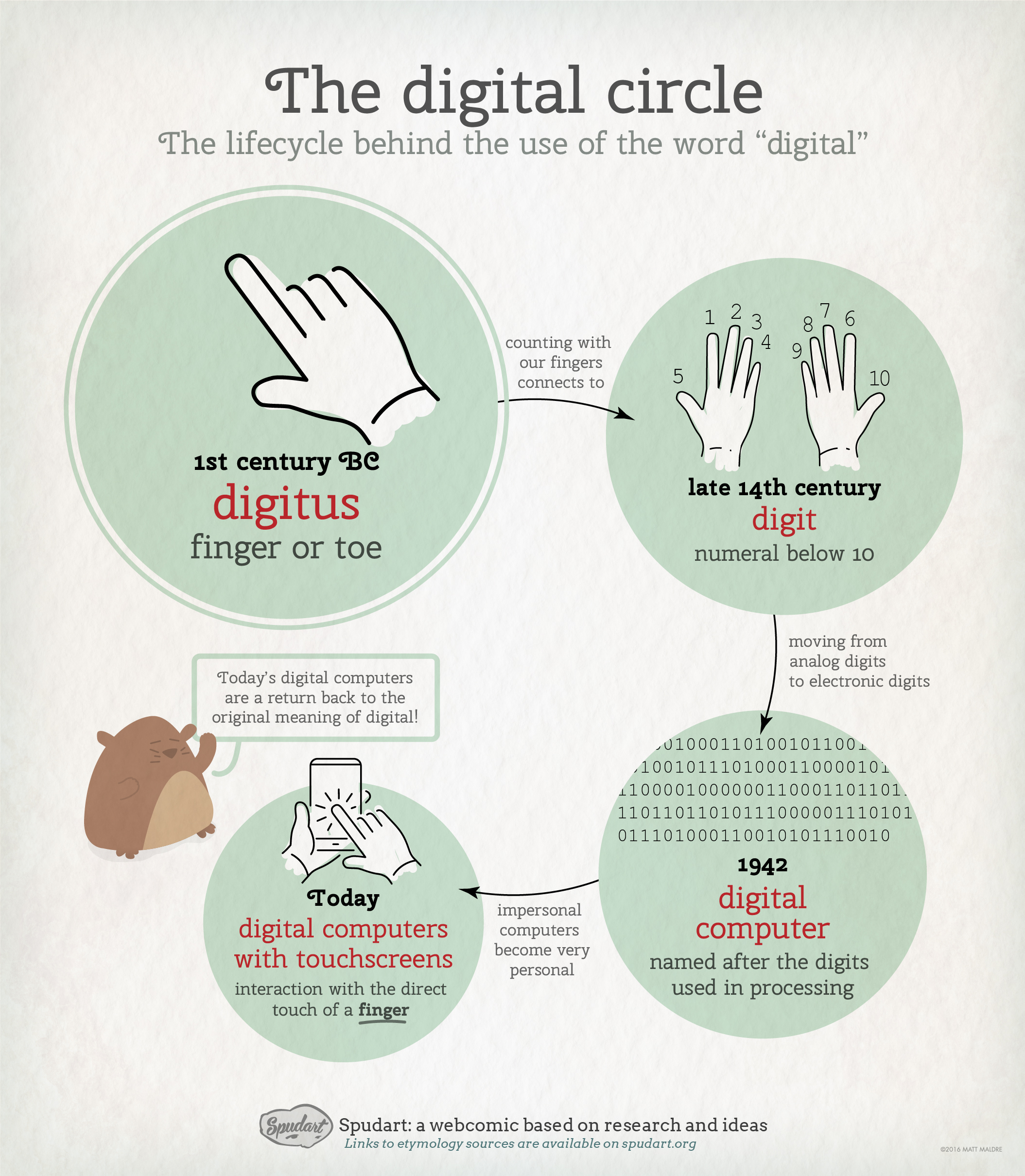 The word “digital” seems to be everywhere: digital publishing, digital currency, digital art. Digital this, digital that. What does digital mean?

The order of these definitions roughly follows how the word digital developed over time. Starting with the finger, the first two definitions connect digit with the finger. The number reference is brought in the third definition. The fourth connects the binary system used in digital computers. 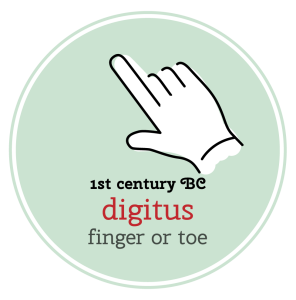 One of the first uses of digital as finger can be found in the writings of Cicero in his letters to his friend Atticus, written around 68 to 44 BC. In book 5, letter 21 of the Epistulae ad Atticum (Letters to Atticus), Cicero is complaining how Brutus (Atticus’ friend) wants to charge him 48% interest instead of the normal 12%. Cicero is quite upset saying,

What a wide difference this implies you will certainly be able to reckon, if I know your fingers.

The phrase “if I know your fingers” implies using one’s fingers to count. Cicero wrote this phrase in Latin as “si  tuos digitos novi”. Hence, digitos for fingers dates back to 68 to 44 BC. 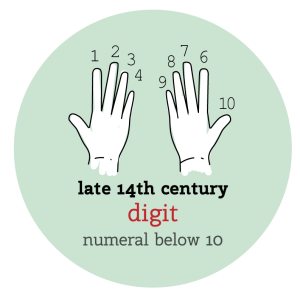 The Oxford British & World English dictionary gives the origin of digital as a number to be:

Dictionary.com’s origin for the word digit mentions both the numeral coming from the late 14th century, and its source in the Latin.

late 14c., “numeral below 10,” from Latin digitus “finger or toe” (also with secondary meanings dealing in counting and numerals)

despite this long history, digital was for many centuries a fairly unimportant word. It wasn’t until the early 20th century that it became significant and widespread – and it did so as a direct result of the invention of the modern computer.

The OxfordWord blog continues to explain that computers started as a complex set of analogue mechanical devices. In the 1930s and 40s these computing devices started to use a new number system to make calculations. Instead of our normal decimal system of 0, 1, 2, 3, 4, 5, 6, 7, 8, and 9; these computers used a binary system of digits to represent everything. The letter B is 01000010. The letter C is 01000011. Thus, these computers became known as the DIGITAL computer.

Those big hulking digital computers became smaller and entered the consumer space. Music was stored digitally on CDs. Cameras record photos onto digital cards. Now both music and photos aren’t even stored on physical devices we personally hold. Instead they are stored in a digital cloud.

Everything is being stored in these 0’s and 1’s. Digital is everywhere. With this digital takeover, people feel the loss of physical things. Audiophiles feel the loss of music coming from a real physical vinyl record. Darkroom photographers hold onto the depths of celluloid-based film and silver halide emulsions in photo paper. This digital world lacks the tactile feel.

Digital connects back to fingers 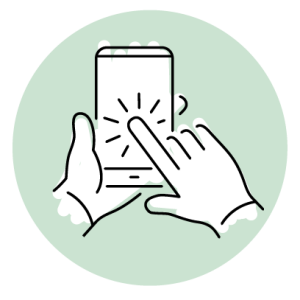 Fascinating how our DIGITAL computers are now directly controlled by our FINGERS. The meaning of digital has come full circle by our fingers connecting back to the origin of being a digit.

↓ Transcript
The digital circle: the lifecycle behind the use of the word "digital"

1st century BC digitus: finger or toe
[counting with our fingers connects to]

yea my favorite clerk at walgreens is that grey hair old girl she always is smiling and lets me know where anything is and what tasty hard candy is on sale. like those new ones called NIPS, they are really good,and on sale right now.the store im talking is at Grant and Swan in Tucson az. i go there specialy for that hard candy and its worth it. thank you Walgreens

Today’s @Dictionarycom word is interdigitate. to interlock, as or like the fingers of both hands.http://www.dictionary.com/wordoftheday/2017/06/28/interdigitate

And I’m just a Baboon…