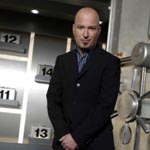 The strategies of the “Deal or No Deal” producers used to make the game show more dramatic:

Host Howie Mandel stands in a quiet back room with 26 sealed suitcases numbered 1 to 26. One of those suitcases contains ONE MILLION DOLLARS. As he walks out of the back room explaining the game, he enters a huge arena filled with yelling people and flashing lights with the camera zooming around. Not only is the stage very impressive with its darkness punctuated by dramatic lights, but they totally contrasted that with the quiet start.

2) Repeat the phrase “ONE MILLION DOLLARS” over and over again

It seemed like Howie couldn’t get enough of saying this phrase. 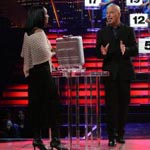 Surely they must have done a thorough job screening the potential contestants, because this one was very good for the show. A young grandma that looked to be in her 30s was able to reach both the old crowd and the young crowd. She was wearing this crocheted shawl which looked gramma-ey, but also sexy. She was very animated and had lots of things to say. No duds on this stage.

The contestant starts by picking one briefcase. That is her briefcase for the rest of the show. She then picks five more suitcases for them to open up to see what she did not win. As those briefcases are opened, the dollar amount is taken off the list, so you can see what her chances are of winning.

Now instead of just having some boring suitcases sitting there. Or some boring digital board. They have beautiful models holding each briefcase. Just like Vanna White turned the letters on Wheel of Fortune, they are bringing the human element into it. 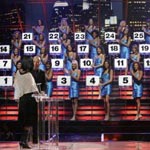 If one Vanna White is good, then surely 26 must be great!

They could have just kept the models nameless and just have them open the briefcase to show what’s inside. But each time the contestant picks a briefcase, the host Howie Mandel calls the model by name to open it up. A really nice touch by the producers. This way viewers can develop their own favorite models. Fan clubs can be born. In fact, the official NBC Deal or No Deal website has a gallery of all the models.

As with any good guy, having a villain only develops more depth and drama to situation. In this case, it’s the BANKER. DOOM DOOM DOOM! The banker has to pay the money that the person wins. The banker offers the contestant a guaranteed cash amount to abandon the original briefcase and quit the game.

Actually, I was quite surprised at how much the banker was offering throughout the game. He surely overprices what the actually risk is.

9) The evil character in dark mode

How to make the evil character even more dramatic. Let’s not show him. Only have him in a dark silhouette.

10) The evil character up high

Notice how the banker is not sitting off to the side of the stage. Oh no. He’s sitting the highest place possible on the stage. This makes him seem that much more powerful and untouchable.

When the evil banker makes his offer to buy out the suitcase, you never hear him talk. The mystery drama-a-fied! He calls the host Howie Mandel to make his offer. It’s a bit annoying, because you want to hear some dark deep voice. But there’s a reason why they dont’ make him talk.

While Howie is talking on the phone with banker, Howie will make these faces like, “wow! I can’t believe how much you are offering!” Which only servers to enhance the drama. How much is it?

If the contestant wants to end the game and accept the bank’s offer to buy out their suitcase, they just don’t merely say, “I’ll take it!” No, they have to hit a red button. And the red button isn’t just sitting there. It’s protected in a clear white case, so it takes the contestant an extra step to it hit. If the contestant is thinking about ending the game, he/she has to first lift up the clear case making it more dramatic, “Oh she is thinking of ending it. Will she hit the button?…”

But part of me thinks that the red button could somehow be even more dramatic. I don’t know how. But somehow.

14) No trivia for the stupid people

By having no trivia, stupid people don’t feel left out.

15) Mathematical odds for the smart people

But if you are a smart person, you’re not left out, because the game can be very interesting to try to calculate just how much risk is involved with not taking the bank’s offer.

A standard in game shows, right before they see what’s in the next briefcase, they cut to commercial break to tell you what’s inside. (I’ll tell ya, I didn’t change the channel, because I didn’t want to miss a second!)

It’s not enough to have the contestant agonizing on stage about what to do, let’s bring in the family too. This adds more depth to the contestant’s personality to see their family and friends.

What’s better than a crazy contestant? A family that is even more crazy! The husband was up dancing all around to each development in the game.

In addition to adding depth to the contestant’s character by having the family on stage, there’s the extra element of drama as the family could argue with her to take the bank’s offer or not. Do you go with your family? Is your family wrong? This has the potential to become very Jerry Springer with the family throwing chairs and such.

Even if your chances of getting the one million dollars are small, if that dollar amount is still being shown on the board, more often than not people will continue to go for it. It’s part of the stress of being on stage with all eyes on you. You can’t wimp out! Yer on national tv. Go for it!

Howie Mandel said, “There are two elements playing in human nature, most people don’t see the opportunity come around, so they say, ‘This is an opportunity. I’m going to go for it. When am I going to get another shot to maybe go for it, even though this money is right in front of me?'”

All 20 of these reasons is why this game show kept me on the elliptical running machine for 50 minutes yesterday (normally I’m only on there for 20 minutes max). My legs were spaghetti afterwards.

Weird habits of the host

As fans of his Bravo series know, Mandel has a strong aversion to shaking hands. “I still don’t shake hands,” he says. “I’m all right with the hugging, it’s just the hands I have a problem with. It’s the petri dish that we carry.

“But the producers said, ‘We don’t want to deal with that. We don’t want to talk about your O.C.D. on this show.’ I don’t think it was obvious that I didn’t shake one contestant’s hand. I hug, put my arm around, but I can’t shake hands. It’s just me.”

Now there is the drama of “Will the contestant try to shake Howie’s hand?!”

How to become a contestant on NBC’s Deal or No Deal:

NBC has a page explaining how to get on the show at: http://www.nbc.com/Casting/#dond

i want to know… …what happened to Howie’s hair???

the fact that this show is on EVERY DAY will be its downfall. anyone remember “Millionaire”? people will get burned out on this show… fast. i’m already burned out on it, and i’ve never even seen it. well, i saw the beginning of it the other night. it’s so flashy and gimmicky and marketing-y. just play the game! stop with all the flashing lights and music and half-naked girls! that’s why i like board games. they are made of simple materials, like cardboard and plastic. you have to invent your own homegrown excitement yourself. NOW THAT’S INTERACTIVE.

“weird habits of host” I don’t refuse to shake people’s hands, but i do refuse to open public bathroom doors with my bare hands when exiting. I always grab a paper towel and open the door with that. I do the same at work. I know of at least one person that doesn’t wash up after taking care of biz-naz. How gross!

LOL near Laura K! “I’m already burned out on it, and I’ve never even seen it …” HAH! I’m with you Laura! I’ll pass. Regarding Howie’s hair, it’s always been extreme [remember the wild afro-eque hair from back in the 80’s?”> The shiny bald head is pretty extreme on him too. I think he needs to find a happy middle ground.

right, the afro. that was sort of a trademark look for him. now he’s gone totally 180 in the hair department. was he starting to go naturally bald, or was he dating himself with the afro?

i was at the gym this morning and i heard an old lady telling her personal trainer about this show…. “its called deal…. or no deal” she said very slowly. it was cute.

About Laura’s comment regarding Millionaire… Laura, that’s why they made this only a week-long event. They may bring it back for another week or so later, but I think the one-week deal shows that they learned from Millionaire. And if/when they do bring it back, please try to at least watch one episode from start to finish before saying you’re burned out on it… If I tuned in when Howie said “we’re going to a commercial,” that wouldn’t be a good first impression either…but that’s not the whole show. Give it another chance. 🙂

oh, it’s only on for a week? yippee! phew. i am so over the reality show “phenom.”