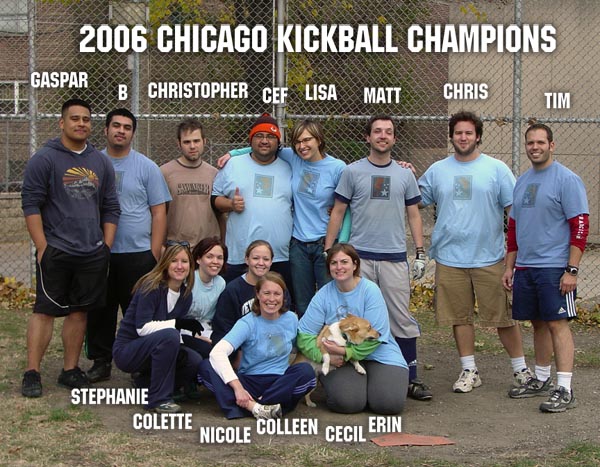 This fall my kickball team won the league championship! We went undefeated for the entire season therefore making us the undisputed the 2006 kickball champions in Chicago. If you want to dispute it, we dare you to bring the challenge onto the field.

Granted, we won a league that was very poorly organized from Chicago Sports Monster. I would never recommend joining one of their kickball leagues. Next year, we’ll probably go with Chicago Sport and Social Club.

Secrets of our success? Before every pitch we would yell out the number of outs and what bases there were forces at. For example, “ONE OUT, FORCE AT FIRST AND SECOND!” Plus we had the vacuum cleaner of a defenseman at third base, Gaspar. That dude caught everything that came near him. Third base is a very pivotal position in kickball, cuz everyone kicks the ball down the third base line.

i think gaspar was the secret to our success. its easy enough to get on base, then gaspar would get up there and kick the ball REALLY far.

i think the secret to your success was the Cef Thumbs-Up. I bet whenever your team was down in the dumps, Cef would flash the thumbs-up and everyone went kickball crazy.

I just noticed some people have the team logo backwards on their shirts!

I noticed that the first time around but I thought “meh, whatever … they’re kickball champions not silkscreen champs!” Where did that logo come from anyway and how did it come to represent your team?

The logo was designed by our very own, Cef Grima. Here’s a blog post about it. 🙂