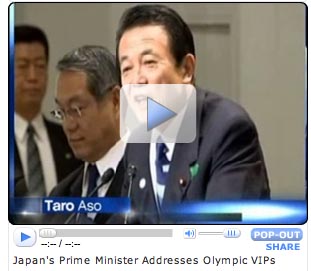 You have to admit, it’s impressive that the Japan Prime Minister showed up in person to show support for Toyko’s bid to host the 2016 Olympics. Chicago just got a video recording of Obama. Granted that video recording was very nice, but Obama finished his presentation with the no-longer-used Chicago Olympic bid tagline, stir the soul. Ouch. So not only does he not show up in person, but he uses an old video. Ah well, he’s a busy man.

well attending the G20 summit and trying to help right the nations..and the worlds economies seems like it might just be a tad more important than the Olympics at this moment..