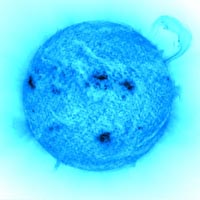 Clear logic says that the further north you go, the closer you get to the sun. But then why does it get colder up north? Maybe this whole “the sun is hot” thing is all wrong. The sun is actually one big cold-emitting snowball. And when it snows, it‚Äôs actually pieces of the sun falling off to earth.

This just in! The color of the sun has been incorrectly inversed for all this time. See the image associated with this post for the true color of the sun! Scientists say, “when something is that far away, the colors tend to get messed up, so yeah, when we thought the sun was like, kinda yellowy and reddish, it was actually blue‚Äîy‚Äôknow, like a big snowball. So uh. Yeah.”

(parts of this text was originally posted at 43things.com on a post called, “memorize the block numbers of major Chicago streets.”)