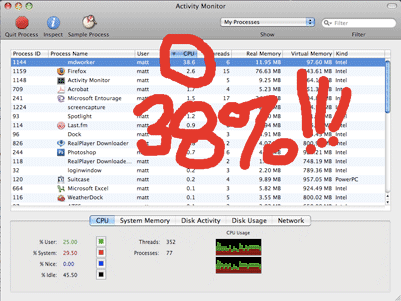 I copied 161gb of files from one external USB drive to another. The process took three hours. I figured that once it was done copying, my computer should behave normally, right?

The computer actually went slower AFTER the copying was done. I opened the “Activity Monitor” (found in Hard Drive > Applications > Utilities > Activity Monitor) and it told me that an application called “mdworker” was using around 40% of my CPU power. WHOA!

Someone on insanelymac.com explained, “It is the new and improved Meta Data importer. Don’t worry, after some time you’ll see its CPU usage drop. It kicks in when there’s any kind of file activity, especially documents.”