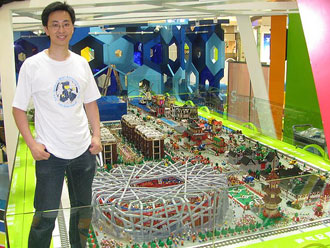 300,000 Lego bricks were used to create a 10ft by 26ft miniature city of the 2008 Beijing Olympics including the Bird Nest Stadium and the Water Cube swimming center.

How much would this cost?

I have a general rule when buying LEGO sets. I like to pay five dollars for every 100 pieces (that’s five cents a piece). 300,000 bricks would cost $15,000. Whoa, fifteen grand just for the supplies to create this stadium. That’s not even including the 4,500 LEGO people. I have no idea how much figures cost. What. Like a dollar a figure? So that’s at least $20,000 in supplies. Now keep in mind, you’d need A LOT more supplies to have extra on hand, cuz you never just use exactly the amount of bricks you need to build something.

The Hong Kong Lego User Group certainly has a large supply of LEGOs. Aside from the cost, this display is very impressive. It’s an increadible work of art. 🙂

You can read more about this display at:

—On your marks, get set, Lego! Welcome to the Olympics where everyone’s quick off the blocks

Heh, the guys who made this creation also did a poster for it: http://www.brickshelf.com/cgi-bin/gallery.cgi?i=3290435

I bet Lego sent them the supplies. No way those dudes spent that much money on Legos. BTW, what’s the dollar-to-yuan exchange rate?

Did you know the cost of Lego pieces has dramatically gone up? I was at the lego store the other day and the large cup size is now $15. A couple years ago it was $7. My wife tells me that Lego pieces are made from petroleum. That would explain the higher cost. Don’t get me wrong. I’m a huge fan of the concept behind LEGO. However, I have a serious beef with how LEGO has monopolized the market. They abuse their fanbase with their outrageously high costs. It really ticks me off.

That guy has a lot of spare time. I can’t imagine having the patience it takes to build such a thing. And the cost of it? I thought hobbies were cheap.