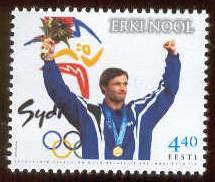 Since Estonia’s independence in 1991, they have only gotten two summer golds. Erki Nool’s decathlon in 2000 and Erika Salumae’s 1992 Cycling.

And only one silver, Juri Jaason’s 2004 silver in single sculls rowing. (he’s estonia’s oldest competitor this Olympics at age 43, this is his 6th olympics).

Estonia has won the five bronze medals. Two of those are from a bronze streak in heavyweight judo the past two olympics (2000 and 2004). Martin Padar should continue the heavyweight Judo streak in the 2008 Olympics as he’s favored to win the gold.