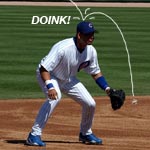 (This post is supposed to appear on Tuesday, December 12, but since I mention this in my funny auto-reply email away message at work, i’m posting it earlier)

On this day in December 12, 1930, Major League Baseball changes a rule that a ball bouncing into the stands is no longer a homerun, but now a double. Then on this day in 1949 the American League votes 7-1 rejecting a proposal to legalize the spitball.

What rule should they instate today? How about: If a fly ball hits a fielder on the head before bouncing, the batter is considered out. That would make for some comical highlights. (and then there would be the subsequent rule where fielders cannot wear a batting helmet on the field).

Do you have an idea for a new rule for baseball?

while batting, a batter swings and inadvertently throws his bat into the stands. He must then use a plastic whiffle bat for the remainder of his atbat.

Managers must wear microphones the entire game. Everything they say will be broadcasted onto a dedicated AM frequency.