While in Chicago during Christmas, Mr. T lost his shoe. Help him find his shoe in the many photos of Mr. T in Chicago at spudart.org/christmas!

I bought a handmade Mr. T doll off eBay in 2000 as a joke. The amount of detail is quite surprising on this doll. Apparently someone in the 80s made a blueprint for crafters to make these dolls, so there’s hundreds of variations of these Mr. T dolls around.

Whenever I carry him around in public, people love him!

He was the only item I took home with me on September 11, 2001 when we evacuated the Tribune Tower. When someone in my department would go on vacation, Mr. T would sit in their chair and fill in for their role while they were gone. When I was laid off by Tribune in December 2005, he was the last item I brought home with me.

For Christmas 2000, I made Mr. T the focus of my Christmas card. 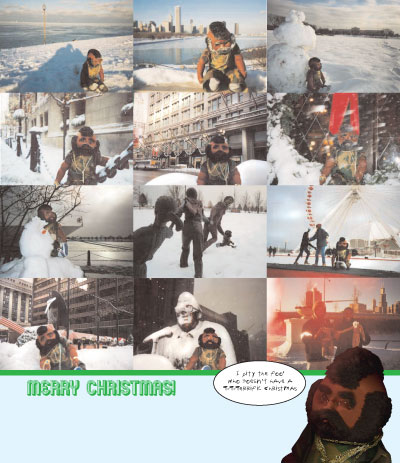 Matt – i want to buy that Mr T doll from you. how much u want? and to think… i prolly could have easily outbid you for him that day you got him off of ebay.

Ha! Noel that’s really funny. My Mr. T doll… for sale… hhaha… i’m just craking up here. You can get him off ebay by doing a search for: Mr. T doll hand made. They look to be HIGH QUALITY.

It’s pretty funny that in my “related articles” section for this post, this one comes up: “I own Tribune Company, and I just met the new CEO Sam Zell“. Certainly the related article comes up for the “Tribune” mention. But I like to think that somehow WordPress thinks Sam Zell and Mr. T are related.