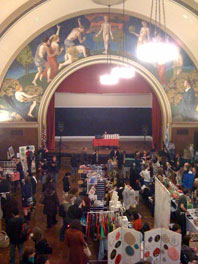 A few blocks east of Chicago’s hipster neighborhood lies the Pulaski Park Fieldhouse. The Renegade Craft Fair holiday show has been held in this wonderful building the past couple years. It’s so much fun exploring all the rooms.

Imagine when it was built in 1912-1914, all the people the neighborhood got together and planned how this building was going to house all these community groups and activities. They would say things like, “ok, this really high-peaked room, that’s where we’ll have the barrel league come together and so they can talk about their barrels.” and “oh, this main room with the stage, that’s where we’ll have our neighborhood trombone contests.”

The place is a Chicago landmark! HOORAY! So now it will never get torn down. That makes me so happy. (well, “never” relatively, of course). From the Chicago landmarks page:

“One of Chicago’s most distinctive park buildings, this fieldhouse was designed to resemble a Central- or Eastern-European public hall and is noteworthy for its fine brickwork, half-timbering, and picturesque tower. It exemplifies the early 20th-century effort to create neighborhood parks filled with organized activities and programs for working-class Chicagoans.”

Oh and the Swordplay Guild meets at the Pulaski Park Fieldhouse. http://www.flickr.com/photos/amyguth/3411617773/

thanks for sharing yet another Chicago treasure. I wonder if they do anything special for Pulaski Day.