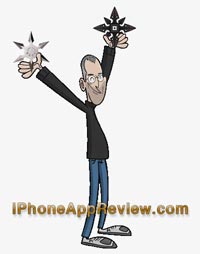 Japanese airport officials would not allow Steve Jobs to bring ninja stars onto his private airplane. In turn Steve Jobs vows to never return to Japan.

According to iPhone App Review:

“Jobs said it wouldn‚Äôt make sense for a person to try to hijack his own plane, according to the report. He then told officials he would never visit Japan again, the magazine reported.”

But seriously, I think the Japanese officials are right. Steve Jobs wears black all the time. Ninjas wear black. I could see Steve Jobs going all ninja on the plane and start throwing the ninja stars.

Steve Jobs, you are dangerous man.

I see him wrapping an all-black headband around his brow, climbing outside the plane in flight, and attacking other airborne vessels with his ninja styling via throwing stars.