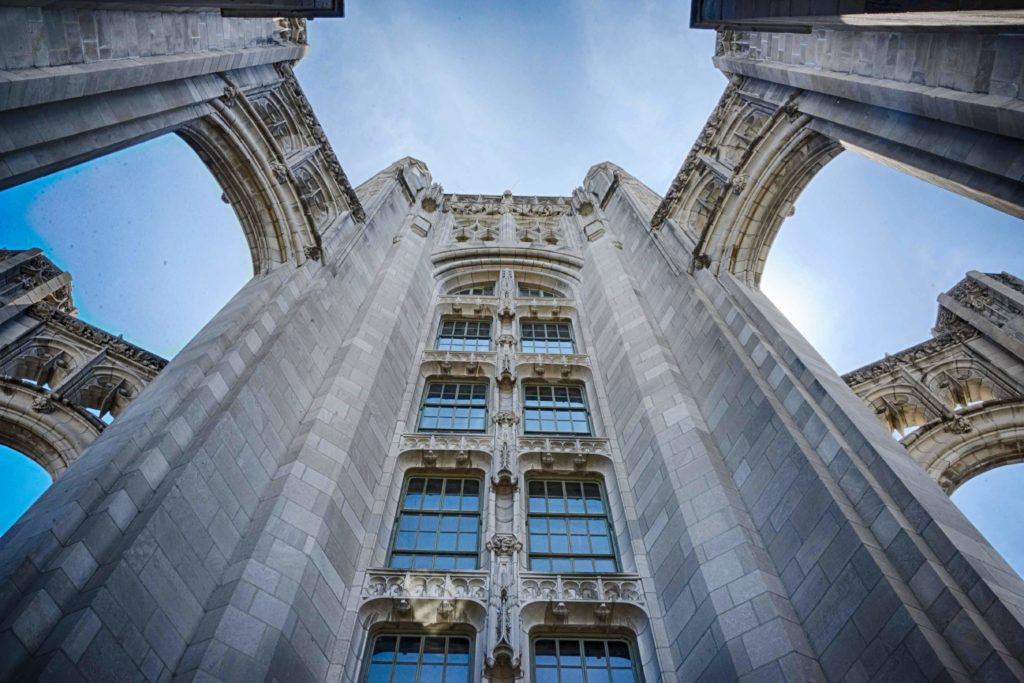 Many of the Tribune journalists have been tweeting and writing emotional stories about leaving the Tribune Tower. 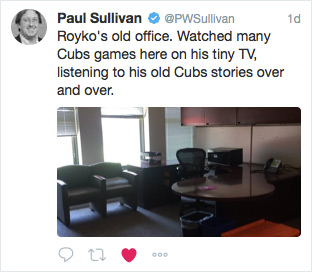 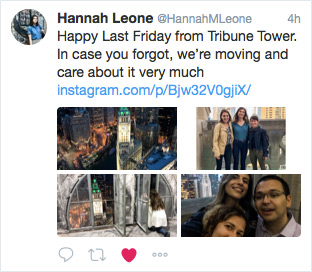 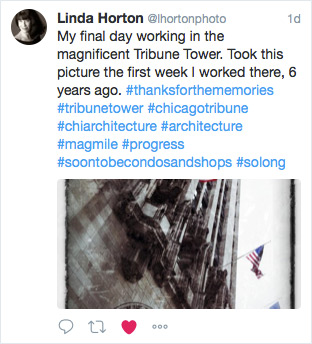 The Tribune big columnists are writing some very poignant stories. Page two columnist John Kass, architecture critic Blair Kamin, Pulitzer-Prize winner Mary Schmich have all weighed in. Everyone seems to be so sad that we are leaving the Tower.

And then you got me, the goofball Matt Maldre who says that the Tribune Tower is a freakin rocketship destined for interstellar travel.

This time around, I’m not all that emotional about it. Why?

I’ve already gone through two goodbyes here. The third goodbye is rather like three strikes and you’re out. Literally out…of the tower.

My first goodbye at Tribune Tower

My first goodbye process happened when I was laid off in 2005. Our entire marketing staff of 15 people was let go. At the time Tribune stock wasn’t doing as well as expected. The executives wanted to see the stock go up a little bit. So Tribune laid off a bunch of people. Victims for the stocks.

We were a great team. All of us have great memories of our time from 2000 to 2005. Everyone from that team looks back at the time and admits it was a unique time. We did great work, won awards, and had fun.

I was the kid of the team, joining at age 25, my second job out of college. So many fun things we did together.

And then we were all laid off. Sorry, you must go, so our stocks can tick up a bit higher temporarily.

I had to go through the emotions of the breakup. I said goodbye to the Tower.

Then four months later Tribune rehired me. I was back working on the same floor. It felt a little bit like cheating. I wasn’t supposed to be back with this place where I went through all this grief letting go. But back I was.

And I stayed on that same floor until 2016. For sixteen years we had wonderful views and collected much stuff into file cabinets and desk drawers.

My cubicle had a long stretching set of storage cabinets expanding over 14 feet long. Every few months, I would print out a new set of images to display on these beige cabinets. My space became known as Gallery 1400. 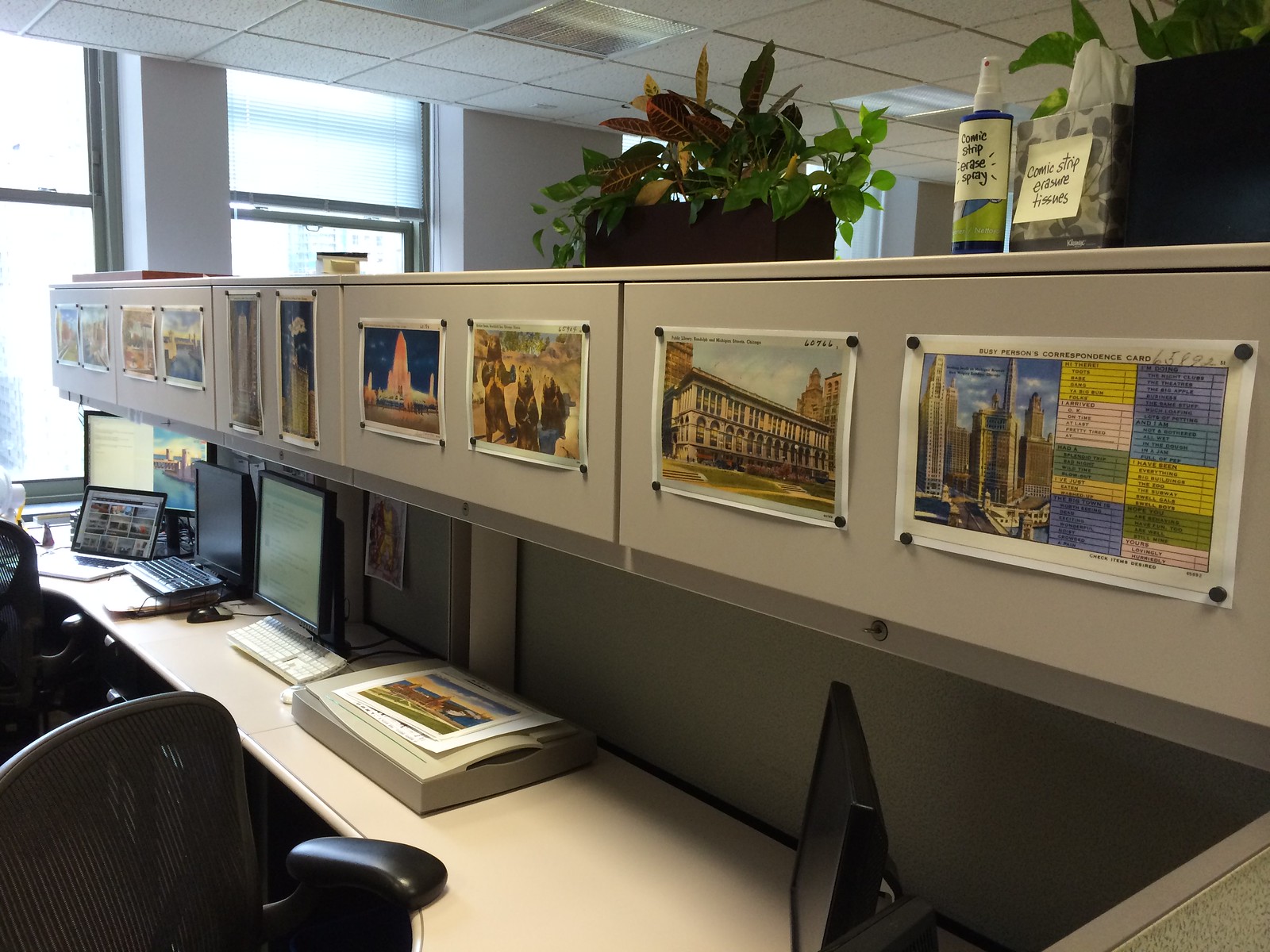 Through the years of declining revenues at the paper, I survived through many rounds of layoffs. Eventually, the floors became more and more empty. The owners of the company moved everyone from eight-some floors into two condensed floors.

I had to say goodbye to the 14th floor. Goodbye to the incredible views. Like when the Blackhawks celebrated their first Stanley Cup outside my window. 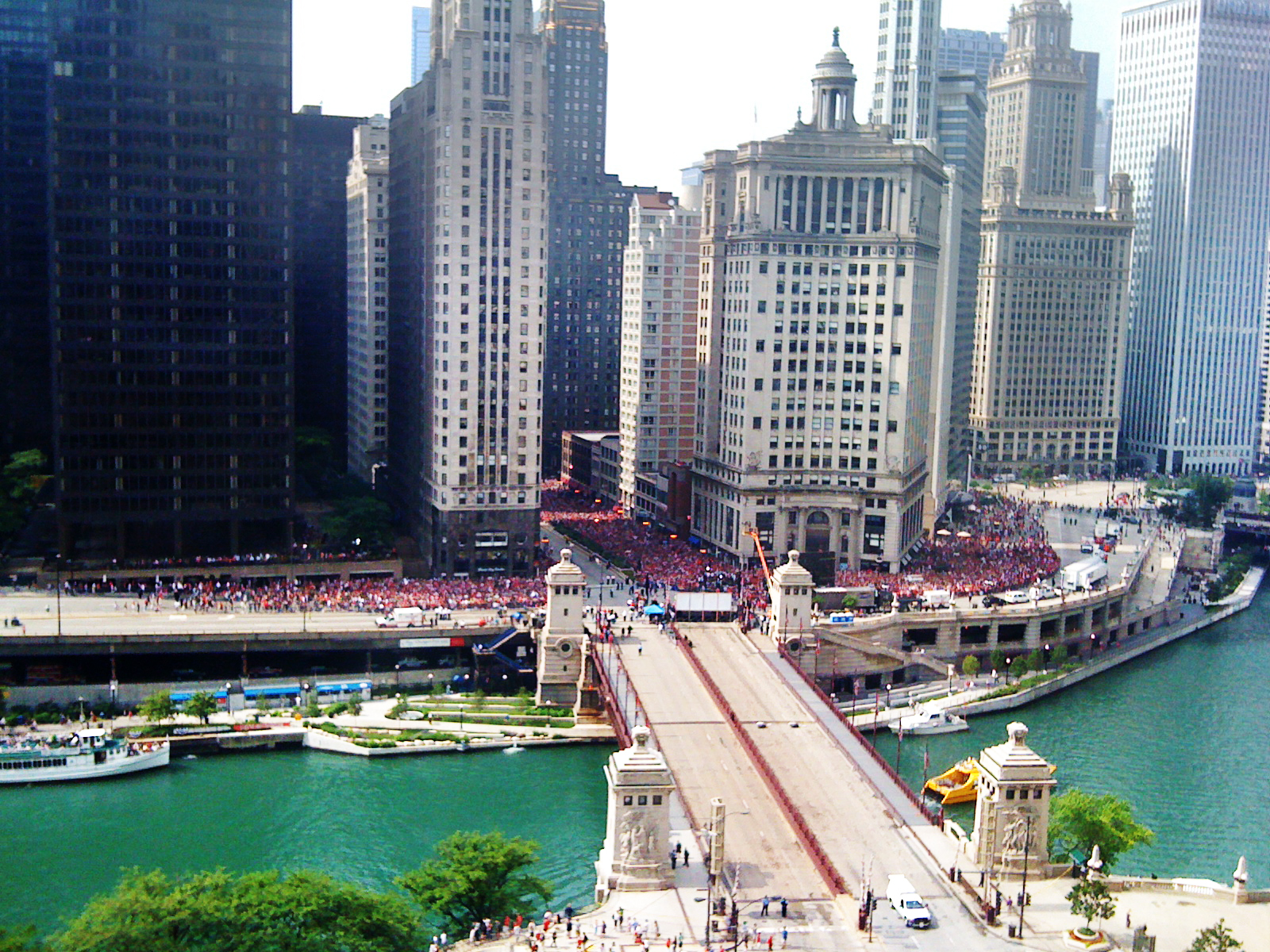 Oprah recorded her last season-opening show, outside our conference room.


Along with losing my great view, I had to go through all my stuff—and all the stuff previous employees had collected during the 90s. We purged and purged.

I had to say goodbye a second time.

Leaving the spacious 14th floor, we squeezed into the third floor with 14 other departments. The desks were so tight, that we didn’t have enough chairs for everyone. I split a chair with another coworker. He worked from home on Monday, Wednesday, Friday. I worked from home on Tuesday and Thursday. That way, two employees can split time at a single desk in the Tribune Tower.

After a year of this alternating time at a single desk, a newly hired executive put down the order that nobody can work from home anymore. I was forced to work in the office every day. However, there was no desk for me. Every day I came into work not knowing where I would sit. If a coworker was out that day, I would squat in his/her desk.

Eventually, they found a permanent desk for me to sit at every day. But as we’ve seen thus far, nothing is permanent. The Tribune Tower was sold, and Chicago Tribune became renters in our own building.

Eventually, the lease ran out. And now we are all leaving the Tribune Tower.

This one is much easier. We’ve only been on this floor for two years, relatively nothing compared to my previous 16 years. I’m ready to go. I have barely anything to purge. The third goodbye now is three strikes and out. I’m ready to move on and have the change.

A new building. Right by Millennium Park. Closer to the Art Institute. The Cultural Center is across the street. I could even take the underground tunnel directly from our building into the Cultural Center!

Easy for me. But not as easy for the editorial team of the Chicago Tribune. They have never really moved inside the Tower. All these years they’ve stayed on the 4th floor. This is their time they have to grieve and recollect.

My wife has been trying to keep my spirits up over the move out of the Tribune Tower, the grand skyscraper on Michigan Avenue that was built as the permanent home for the Chicago Tribune.

I’ve spent my life in the Tower. I love it, the memories it holds for me and for others who’ve been fortunate to work here.

Yup. That was like my first goodbye. Saying goodbye to all the good times with coworkers in the Tower.

The Pulitzer-Prize winner, Mary Schmich, expresses her grief of purging her nest.

But my colleagues and I are still here, making peace with the past tense as we clear out our workspaces, shrinking the material stuff of our work lives into plastic orange crates, one per person.

In its way, our shedding is as communal as a barn-raising. While we’re also putting out the paper, we dig through drawers, flip through half-remembered folders, excavate shoes from underneath our desks, share our discoveries, seek counsel.

“Should I keep this?”

“Oh my God, I’d completely forgotten I had this.”

To keep or not to keep? Over and over, that’s the question.

Packing up a place, especially one you’ve occupied for a long time, stirs up memories and moods as surely as wind kicks up dust. It can be as true in an office as in a home.

A desk may be small, but like a house, it’s a nest. We feather it with papers, photos, cherished objects that mean nothing to anyone else.

Yup. I’ve been there. That was me two years ago when we moved off the 14th floor.

But honestly — there’s no glory in being a tenant in somebody else’s stolid modernist high-rise, especially when you’re leaving a building as architecturally distinguished as the tower. One Prudential Plaza could be the box Tribune Tower came in.

Yup! We are moving into a box. For me, this box has a special family meaning. My dad, born as a refugee, came to America at 3 years old. When he turned 18 years old, he was sworn in as a U.S. citizen at the Prudential Building.

Kamin speaks of the connection between our work continuing on, and the legacy we left at the Tower.

I will miss the visual poetry of the tower and its hushed, churchlike Michigan Avenue lobby. We, the journalists, are leaving, but our watchdog role will live on in our new quarters. And the architects’ “signature” at the tower will remain.

It’s right there, their names inscribed in English Gothic lettering, in the block of stone to the right of the skyscraper’s entrance. I think of that block as a cornerstone of creativity.

I like to think of this Prudential box as a blank canvas, ready for our creativity to splash upon it. 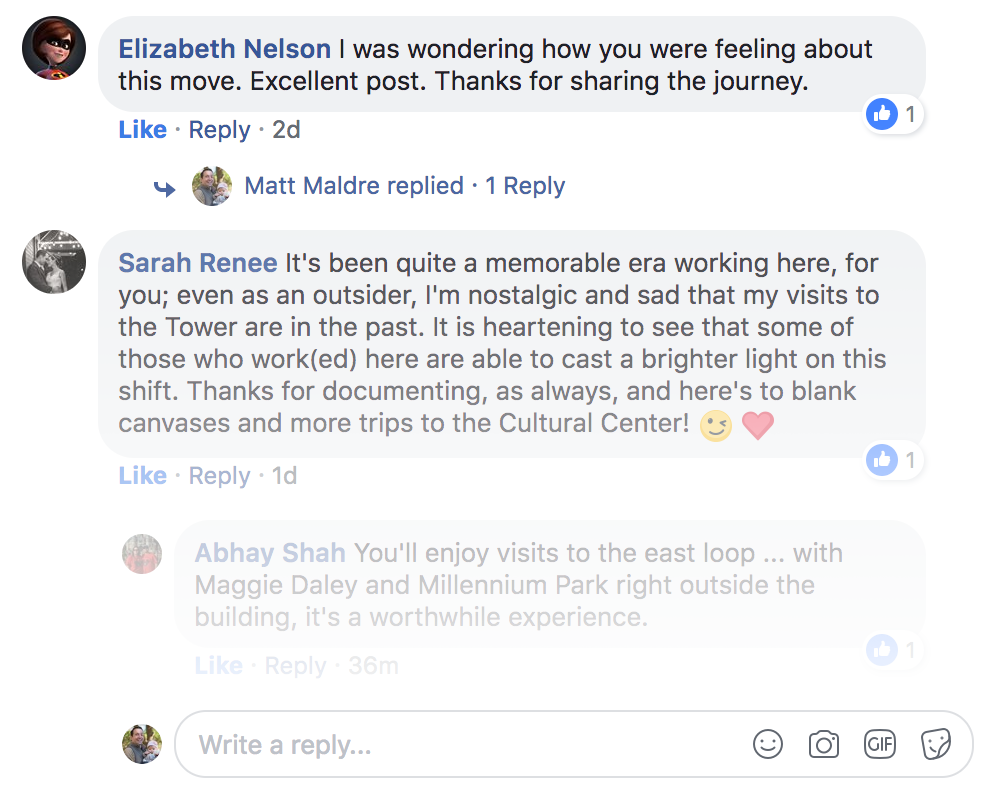 I have a lot of fun memories from the early 2000s as well. My favorite was making Rice Krispie Treats on Thursdays in the microwave for the 13th floor. Leaving in an ambulance after getting a concussion playing basketball in the gym is another crazy memory. Did you know I found a picture of Tom Skilling in my first desk? I think I still even have my badge after all these years.

Everyone should have a photo of Tom Skilling at their desk!

How many years did you work in the Tribune Tower?

Well, I just happened to stumble upon the Chicago Tribune editorial floor right before the head editor gave a speech to the entire staff.

I work on the 3rd floor with the advertising staff of the Tribune. Editorial is on the 4th floor. I was getting a routine snack at the vending machine on the 3rd. While walking to the kitchen, I passed by the central staircase leading up to the 4th floor.

The Chicago Tribune editorial staff moves out a week before we do. I’ve been meaning to go up to their floor to see what it looks like. Especially now, since they are just two hours away from moving out.

I walked up the staircase that I barely ever use. Stepping onto their floor, barely anyone was their desk. Everyone was gathered in the middle of the floor waiting for the editor to give his speech.

Since I’m not part of the editorial team of the Chicago Tribune, I just stood off to the side. The architecture critic Blair Kamin was off to the side too. (I did not approach him.)

Pulitzer-prize winner Mary Schmich (in red) is standing on the desk. I’m hidden behind the blue pillar on the right.
https://twitter.com/robertloerzel/status/1005181070990553088