Rick Steves—THE name in travel guides. He’s now writing a newspaper column and Tribune Media Services is syndicating him to newspapers across the country. I designed the sell sheet to help the salespeople to convince newspaper editors to buy his column.

Since Rick Steves already has such a great brand going with his guidebooks, I picked up the basic look from his jacket covers—yellow Futura bold condensed on a field of royal blue. But I expanded it a bit more, make it more fun, and added more yellow for some happy pop. And the design elements also add more fun, with Rick’s head poking out of a circle with rays bursting out. A fun eyebrow to highlight that this is a weekly column. And a bunch of photoshop work adding soft shadows to pull it together into a cohesive look.

Even the back of the sheet has some fun treatment for the call to action. Usually, the call to action just ends up being put into a rectangle box. But here I pulled the curved the eyebrow from the front and used it on the back to add some appeal. And I also dropped another photo of Rick into the call. He’s such a TV personality, I wanted to use his image as much as possible to really drive home that it’s his personality that editors are going to get into their newspapers. 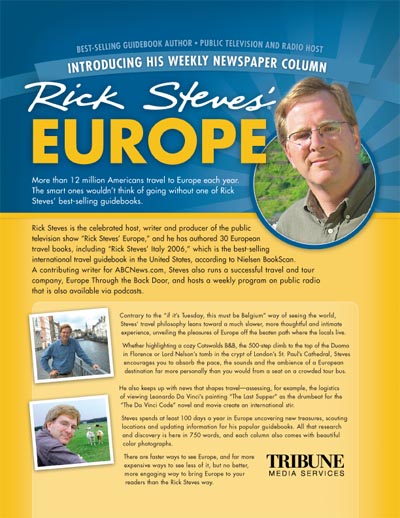 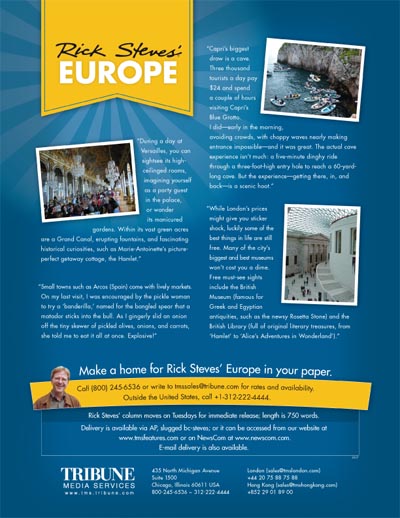 Very cool that TMS landed Rick Steves! I used to watch his show all the time!

Rick Steves rulz! There’s only one show that I Tivo and it’s Rick Steves Europe. His shows give a great taste of European destinations. I love museums and such and Rick always gives great insight into the cultural history of the cities he’s in. And I especially enjoy that he’s an Art nut. oh. nice clean polished design as usually, matt. I didn’t realize that he had a weekly newspaper column. The trib should pick that up.

It already picked it up I think. Nice design

This is just silly.

Very well done! I love the Rick Steves head popping out of the page. He is all about ego so you better put him front and center. He’s great though. Helped me a lot in my travels.

I love rick steves lisp. He’s manly, but in a feminine way. He’s great. Quite a little empire he’s created I must say.

a europe brosure in my opinion i dont like it