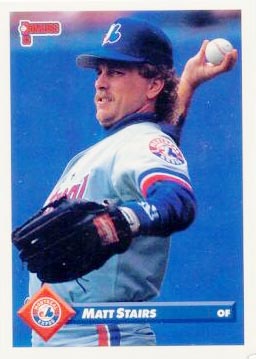 I’m dedicating today, May 25, 2007 to the Major League ballplayer Matt Stairs. In the past week, the 39-year-old journeyman has hit 4 homeruns. That is hilarious for a number of reasons:

3) That he would hit four homeruns.

4) He’s Matt Stairs. Anything he does would be funny.

5) He did it for the Blue Jays. That’s funny that there is still a Major League ballclup in Canada.

6) He stole one base so far this year. I would like to see that.

But seriously, I do like Matt Stairs, he played one year for the Cubs and he was a neat guy to have on the team. He’s played for 10 teams so far.

–He is currently the 8th oldest active ballplayer.

–In the offseason he coaches hockey for John Bapst High School, a private high school located in Maine.

–He played for the Canadian Olympic Team at the 1988 Summer Olympics in Seoul, South Korea.

stairshof.blogspot.com check out the link, you might appreciate the matt stairs article i wrote for the blog yesterday!

His mustache in that picture is classic! What a character for MLB Baseball.