What can I say when I got the chance to design the sheet for the new syndicated Guinness World Records newspaper column? I had visions of the world’s heaviest twins sitting on their motorcycles, the dude with the longest fingernails, the man with a kazillion cigarettes in his mouth.

Unfortunately, I learned that many of those images are not owned by Guinness World Records. Guinness can only use them in an editorial context. This sheet is a promotional sheet, thereby outside the realm of proper use. Guinness owns only a handful of images, but when I saw straw-boy, he had to be the poster child for this sheet. Just look at him! 210 straws in his mouth!

Much of the recent Guinness books have this futuristic style which I find very bizarre from what I remember of Guinness as a child. Guinness reminds me of vaudeville, circus-type aesthetic. So the trick with this sheet was merging the futuristic look of their current books, their existing color palette, and what most people think of when they think of Guinness.

I admit that I did tweak the color palette used in the layout (the logo in the lower right, however, does remain unchanged). Their colors were too bright for this design, so I darkened them down a bit. I’m quite happy with the end result, and so were the people over at Guinness World Records. They mentioned they wanted more designs like mine! 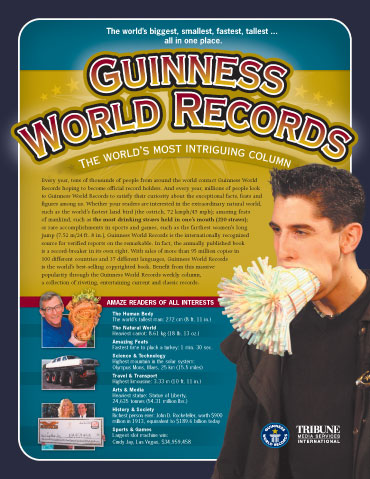 really shannon? can you prove it?

What can I say.. Congratulations! There aren’t many persons who have this opportunity. I hope that you will know how to take advantage of it and don’t spoil it.