By Matt Maldre on February 10, 2016 in Design, Illustration, Outer space 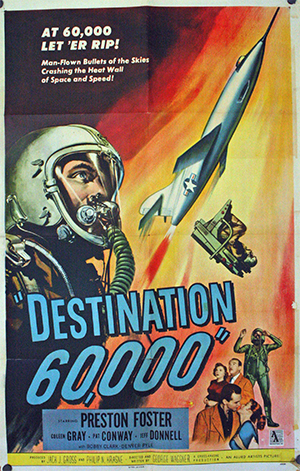 A worm dressed in an astronaut uniform watches a rocket blast off into outer space. Totally crazy. This is the final poster in this series of three illustrating the etymology of science fiction (view webcomic). The Worm character needed to be the main character for this final poster. Quite a challenge, since the worm is pretty much just a curvy line.

Since this poster’s title is Knowledge Invention, I wanted something to be kinda technology-based. This poster of a experimental supersonic fighter looked really cool. Plus, having a air fighter pilot in a helmet would make a good uniform for the worm. Nothing is more fun than putting props on my comic’s characters!

The original poster is from the 1957 movie “Destination 60,000”. I don’t think this poster is as iconic as the other two, but the bold graphics fit what I needed to do.

The fighter jet is swapped out with a rocket ship. Even Etym Mole gets his own astronaut outfit. Who knows, maybe in figure comics, the Worm and Etym will just wear their astronaut costumes for the heck of it. Kinda like how little kids wear their halloween costumes at any time of the year.

I was really pleased at how I was able to use the clouds graphic in all three posters. That really helps to tie the series together.

The fonts used on this poster are: BigNoodleTitling by James Arboghast. This super-condense font has some nice details. The bridge connects in the upper case N, which works very well for a word like invention with three Ns. 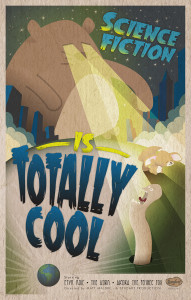 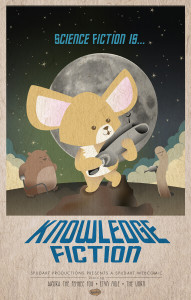 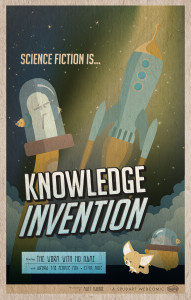 How do you think Etym gets around in his astronaut outfit? It looks like he would just roll around! 🙂