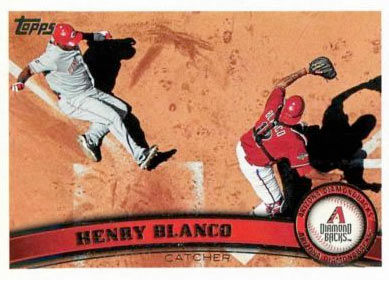 This is a cool photo of Henry Blanco. It’s too bad the design of the card is covering up an essential part of the photo, home plate. It makes you wonder what the photographer thinks of this card.

It makes you wonder if the runner was safe or out. That’s one of the things I like about photos in newspapers. There is a caption, and you know what happened. In baseball cards, they never tell you what happened. Hmmm. That’s kind of a realization for me. I would rather collect newspaper photos than baseball cards. The photo on the card has no story. The photo only serves as a general illustration of that player from that year. There is no story within that moment in the baseball card.