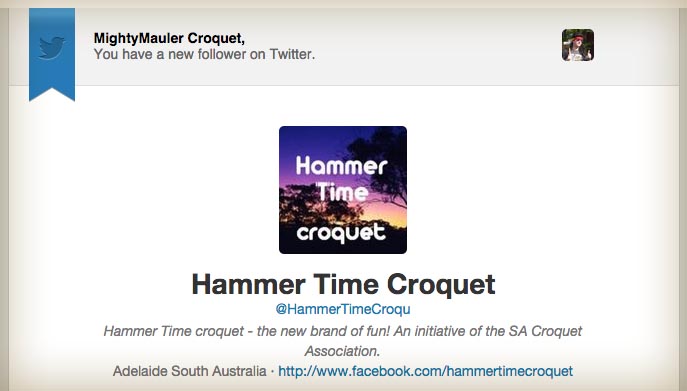 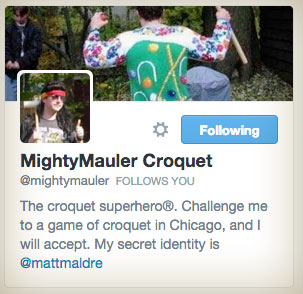 Now what do you write on the Facebook page for Hammer Time Croquet? Why lyrics from MC Hammer’s “U Can’t Touch This”, of course. A Google search for “Hammertime lyrics” results in the AZ Lyrics website with the lyrics for “U Can’t Touch This.

The lyrics “Break it down! Stop, Hammer time! It’s “Hammer, go Hammer, MC Hammer, yo Hammer” And the rest can go and play” get copied and pasted onto the HammerTime Facebook Page. 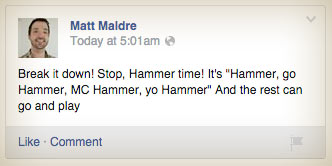 Amused by my 90s flashback, I decide to listen to U Can’t Touch This on Spotify. Since the lyrics are up in my browser, I sing along. 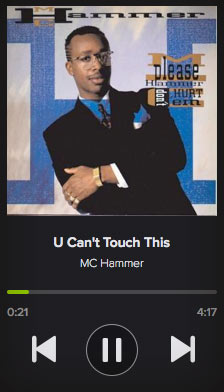 Part of the lyrics absolutely mystified me. I’ve probably heard “U Can’t Touch This” a thousand times. I always thought he was saying, “Faster than a white boy take to learn” but it’s actually “pass them a wipe or tape to learn”

What the freak is a “wipe”? Also, doesn’t it make more sense for it to say “faster than a white boy take to learn?” Seriously, I’ve been singing those lyrics since 1990.

You talking about the Hammer you talking about a show
That’s hype, and tight
Singers are sweating so pass them a wipe or a tape,
to learn
What’s it gonna take in the 90’s to burn
The charts? Legit
Either work hard or you might as well quit.

It took the Australian “Hammer Time” Facebook page for me to finally learn the true lyrics with MC Hammer’s “U Can’t Touch This” — 25 years later. Truly this white boy needs to learn.